I’ve been in Bologna for a few days.  It’s the first time I’ve been to Italy for a holiday and it’s glorious to have a few days to roam and explore.  The museums here are wonderful: havens of cool air and tranquil discovery.  In the Science Museum we came across a handsome library with this formidable looking library ladder leading to knowledge and the dazzling light beyond. 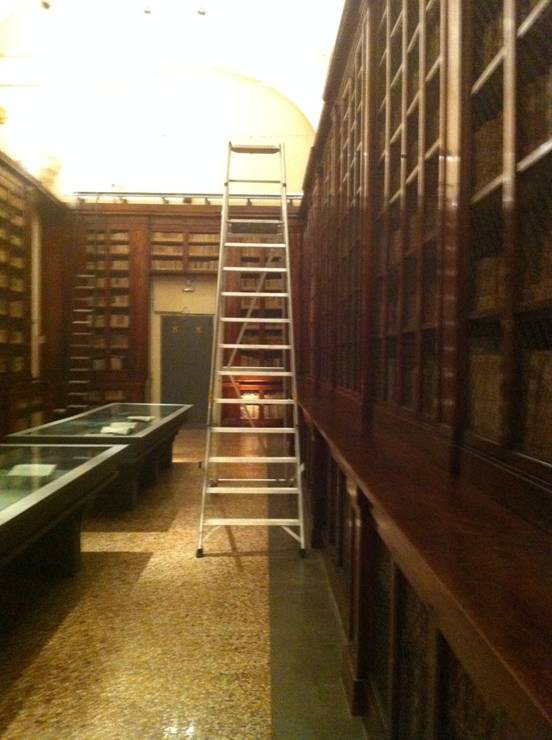 I can’t help but approve.  Anyone with a library ladder like that is serious about books.

At the Pinacoteca Nazionale I was moved by the lovely colour and decoration of the religious books in the fifteenth century religious paintings.  They don’t seem to mind you getting your camera out here, so I took some pictures (without flash) to share with you: 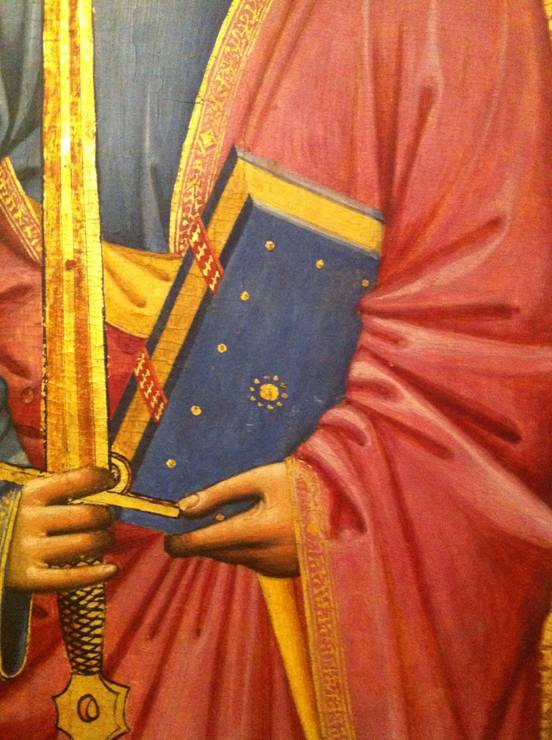 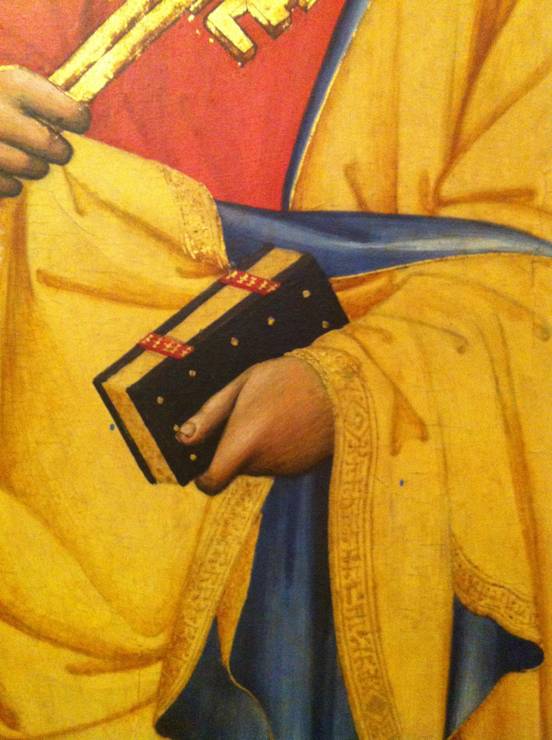 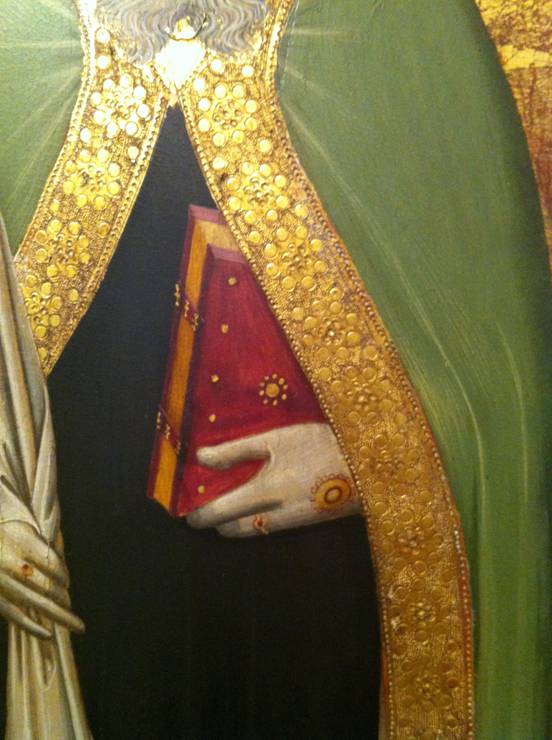 Aren’t they gorgeous?  Both painter and binder have gone to great lengths to display these religious texts as the prized objects they are.

There were some puzzling examples.  Here is what appears to be a burning book in the hands of St Anthony… 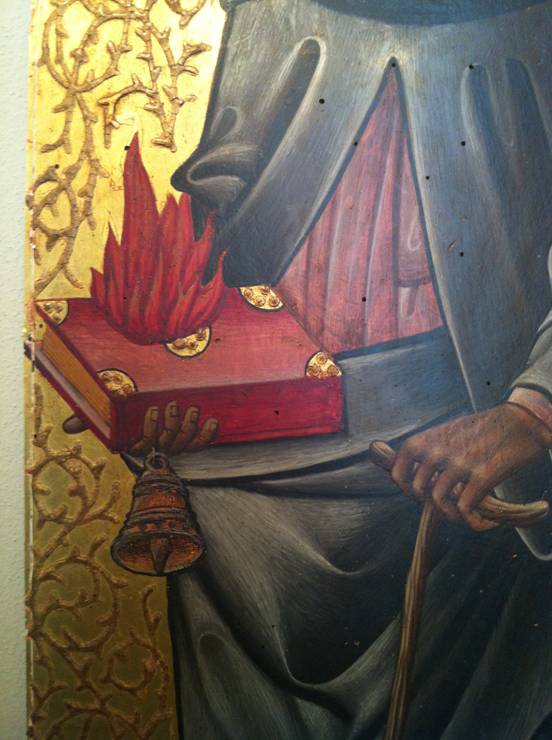 …only I don’t think it can be.  From what I have been able to discover on a quick hunt, Anthony was renowned for his learning and often portrayed in a glorious illumination.  Might these ‘flames’ be the illumination of knowledge?  Hmmm.

And here’s another odd one, Girolamo.   What on earth is it that he is carrying on his book? 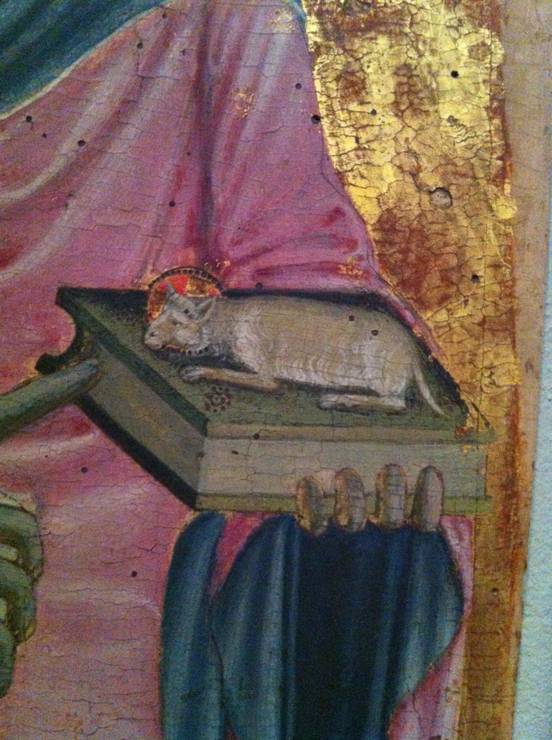 Girolamo apparently DID burn books when he didn’t approve of them.  Ovid, Boccaccio, Dante were all destroyed in his bonfire of the vanities.  He got his come uppance later when he was excommunicated for being too extreme, but that was afterwards: this was painted during his lifetime.  None of which explains the small mammal perched on his bible…

Perhaps these books have whetted your appetite?  If so, and if you are a fluent latin reader, here’s an open book so you can have a read: 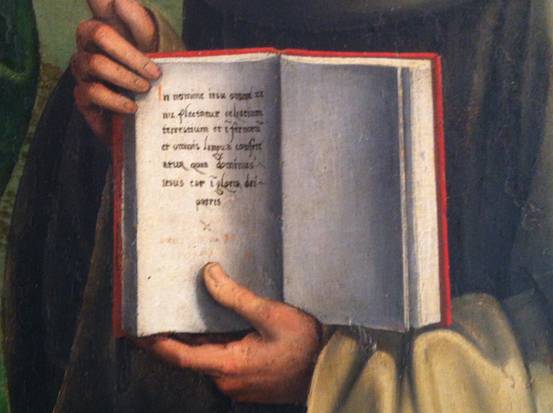 I love the way the shadow falls where the pages are stitched in.

And here’s something else of interest only to committed bibliophiles.  Look at the way they shelved their books: 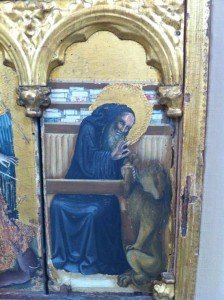 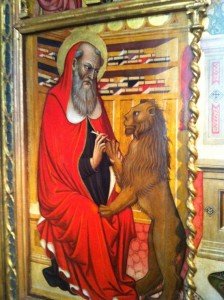 I hope the lion in the study didn’t distract you from noticing that the books are shelved on their sides.  (Though it’s nice to see that cats and books were considered a desirable combination 650 years ago too.)   I suppose that the bindings were of soft leather, and the pages wouldn’t have been protected adequately if the books had been shelved standing as we do.  The man who would know about this for sure is Alberto Manguel.  His book The History of Reading is a great favourite of mine but I haven’t read it for some years and it’s in storage – oh woe! – but if you can get a copy  you’ll find that he really knows his stuff.  I was going through a period of being a bit reluctant to read non-fiction when his book first came into my hands, but his account of the relationship between readers and their books over the ages is so fascinating that I just gobbled it up.  Now all these paintings make me want to read it again.

Just two more pictures to finish.  Here’s the infant Jesus, having been put down for his afternoon nap, elbow nonchalantly resting on a book: 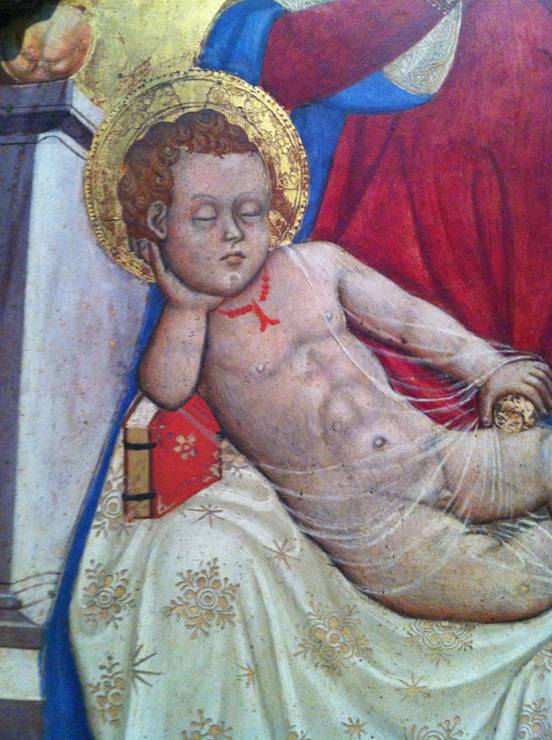 Finally, my favourite picture from the whole museum.  It doesn’t have a book in it at all, but for some reason it stole my heart – perhaps because it reminds me of Stanley Spencer, a twentieth century British artist I love.  In any case, it has another ladder, which brings us full circle. 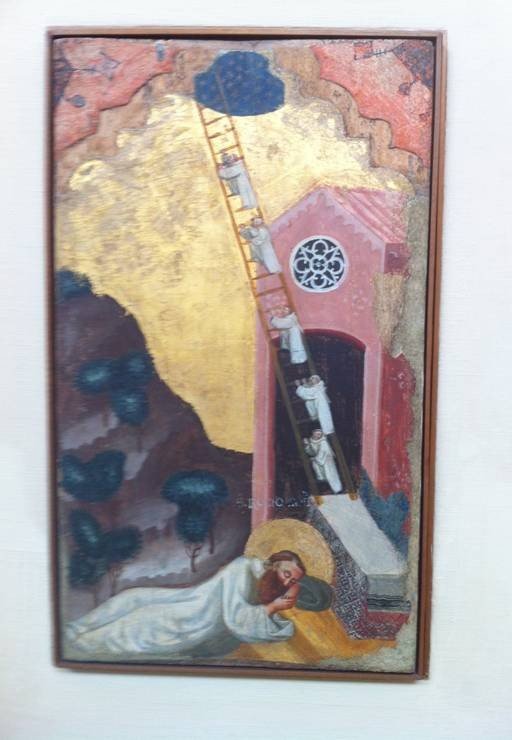